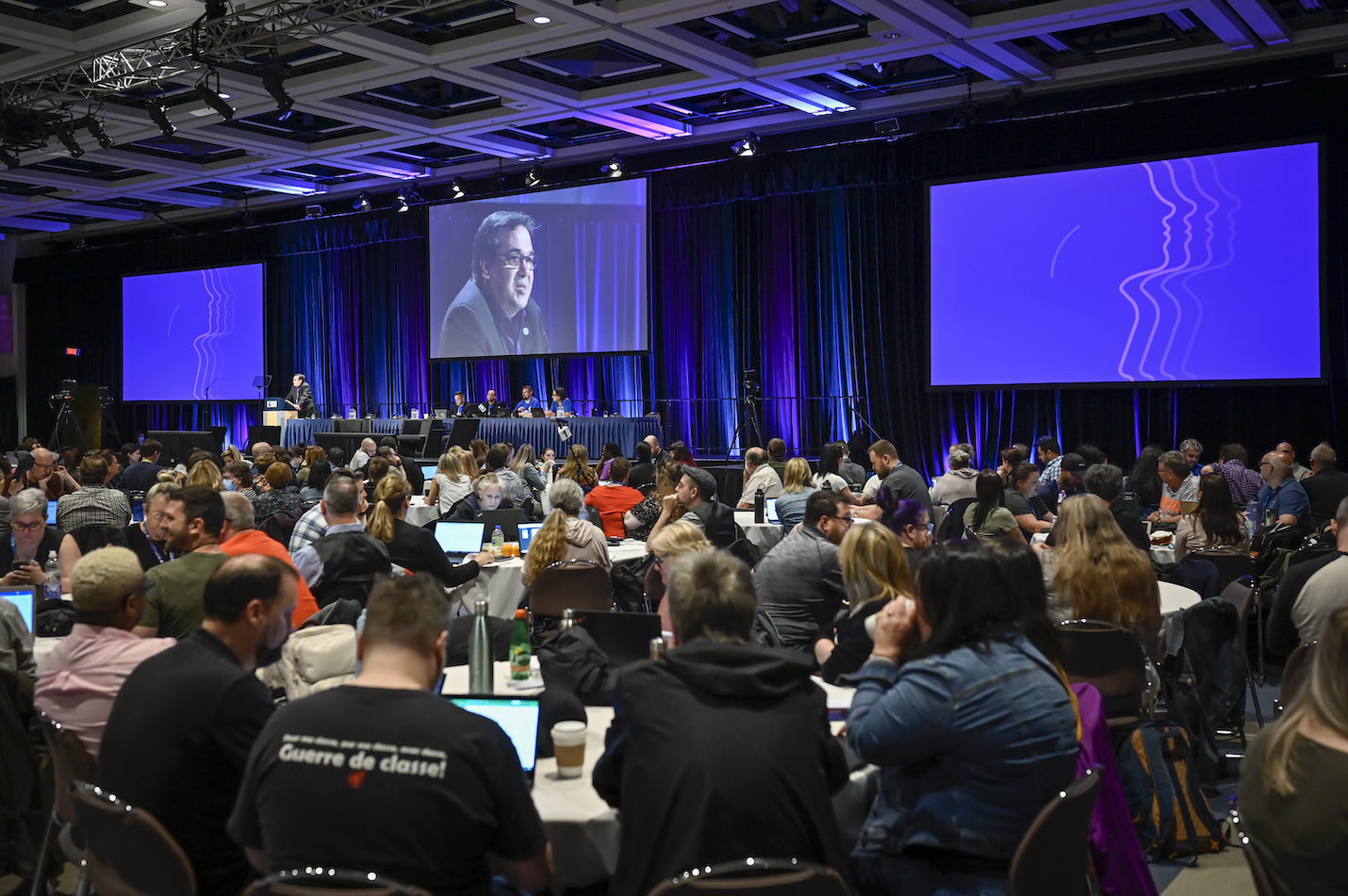 Members will be consulted on central table and sectorial demands from July 31 to September 23, 2022

In order to give your opinion and to vote upon the demands, follow your local union news to know when your general assembly will be held

At the end of the info-nego, you will find the intended timeline for the CSN public sector bargaining until the submission to the government of central table demands

Preparations for the 2023 round of bargaining are progressing. At a meeting in late May, some 600 public service workers who are CSN members debated about union central table demands a few months before the list of demands must be submitted to the government, which is planned for October.

Activists also took the time to discuss inflation, which has hit the entire population hard, but also those who are profiting from this runaway inflation, i.e. some very affluent groups. A discussion panel, moderated by columnist Aurélie Lanctôt and made up of panellists Julia Posca (sociologist and researcher at the Institut de recherche et d’informations socioéconomiques (IRIS)) and Virginie Larivière (Collectif pour un Québec sans pauvreté), allowed for breaking down some myths related to inflation. The role of communications and mobilization was also the subject of debates between activists in various sectors.

Taking advantage of their presence in Québec, workers stood in front of the National Assembly to send the government a message: the time for sacrifices is over! With one voice, the four public-sector federations, i.e., the Fédération des professionnèles (FP-CSN), the Fédération nationale des enseignantes et des enseignants du Québec (FNEEQ-CSN), the Fédération des employées et employés de services publics (FEESP-CSN) et the Fédération de la santé et des services sociaux (FSSS-CSN), warned the government that there are limits to self-sacrifice. “Over the past two years, in particular, we have given all of ourselves, to the detriment of our own physical and psychological health in many cases, so that students could continue their studies and be supported, and so that patients could continue to be taken care of. As we enter into our round of bargaining, we want to be certain that the government understands the message: asking us to sacrifice ourselves more is unjustifiable since the pandemic has shown how fragile our public services are. Strong public services are a measure of a strong Quebec.”

For his part, First Vice-President of the CSN, François Enault provided a reminder that we will demand investments that will allow for improving working and practice conditions. Of course, we are also looking for improved wages, with special attention paid to inflation. “It is not true that we will ask workers to tighten their belts while waiting for inflation to go down. The government must take this into consideration.”

Starting at the end of July, all of the central table demands of the Front commun [Common Front] will be submitted for adoption by public service workers until September, during general assemblies held across Quebec.

Remember that the Confédération des syndicats nationaux (CSN), the Centrale des syndicats du Québec (CSQ), and the Fédération des travailleurs et travailleuses du Québec (FTQ) announced that a common front would be formed to bargain central table demands as one voice with the government. The Front commun will submit its demands to the Conseil du trésor in the fall. The collective agreements will end in less than a year, on March 31, 2023.

Over the past few months, many milestones were reached in preparation for submitting the list of union demands, which will take place in late October. Here is a short reminder of the steps that have been completed and those to come.